After a day of wall bashing qualifying fun, the Top 32 had been set. Drivers were bracketed against other drivers they fear, or ones they would undoubtedly trample in a wall of smoke. Competition day was bound to be full of awkward excitement, due to Formula Drift’s new rules for the 2014 season, such as no battle for 3rd place, no protest until the Great 8, and many other rules that left fans scratching and shaking their heads. Nonetheless, the fans still showed up.

Every tandem battle in competition is significant in how difficult or simple it will make a driver’s fight to victory. In this article, we will revisit every match-up of the Top 32, and show you who the Formula Drift Round 1 – “The Streets of Long Beach” 1st, 2nd, and 3rd place finishers had to go through on the way to the top.

1. Essa vs. Richter – Essa
Now we don’t like to dismiss the talent of Rookie Jeremy Richter, but Mike Essa was definitely one of the toughest draws for any competitor. Essa coming in hot from his 2013 FD Championship season in his battle tested car, qualifying 1st with only one run, would leave Richter in a smoke cloud with a 0 for his first score. Richter ended up calling 5 minutes and Essa walked away with the victory when he was unable to return to the track to continue the match.

2. Mordaunt vs. Baribeau – Baribeau
Mats Baribeau gets a BYE due to an engine failure in Pat Mourdant’s ARK Hyundai Genesis Coupe. Too bad for the fans as they missed a battle, but luckily 2013 “Rookie of the Year” was able to put down a clean solo run and net a score which gave him the automatic advance.

3. Denofa vs. Mertzanis – Mertzanis
Seems like the gremlins are getting the best of everyone, as Chelsea Denofa rounds the last apex in his BC racing BMW – he cuts power, causing a slight collision by “DMZ” Dennis Mertzanis. Denofa limps off track only to call 5 minutes and is unable to return due to a rumored “broken axle.”

4. Wang vs. Rydquist – Wang
Carl Rydquist in the Road Race Engineering 350Z seems to have problems with stability during drift from the onset of following Forrest Wang, and can’t capture a score. This leaves a huge deficit for Rydquist on his lead run. Wang keeps pace at about 3 car lengths until the last clip where he lunges forward, driving his 2JZ S14 hard around the last clip and sealing the door on Rydquist – ending his day. OPINION: Forrest’s follow run was somewhat riding the edge of the “Inactive Chase” rule, If it weren’t for his angle and lunge towards the apex on the last clipping point, Wang may have received a zero also.

5. Moen vs. Stoneback – Moen
Stoneback, a rookie, comes in with little seat time in the car and unfortunately can’t keep up with the line, speed, and smoke that Kenny Moen puts down. Stoneback launches hard from the start line, smoking the tires all the way to the entry in an attempt to gain distance from the ever nearing Moen, but without much success. Moen is never far, matching line and throwing in a bit more angle. Moen advances with his lead run being the main contributing factor. 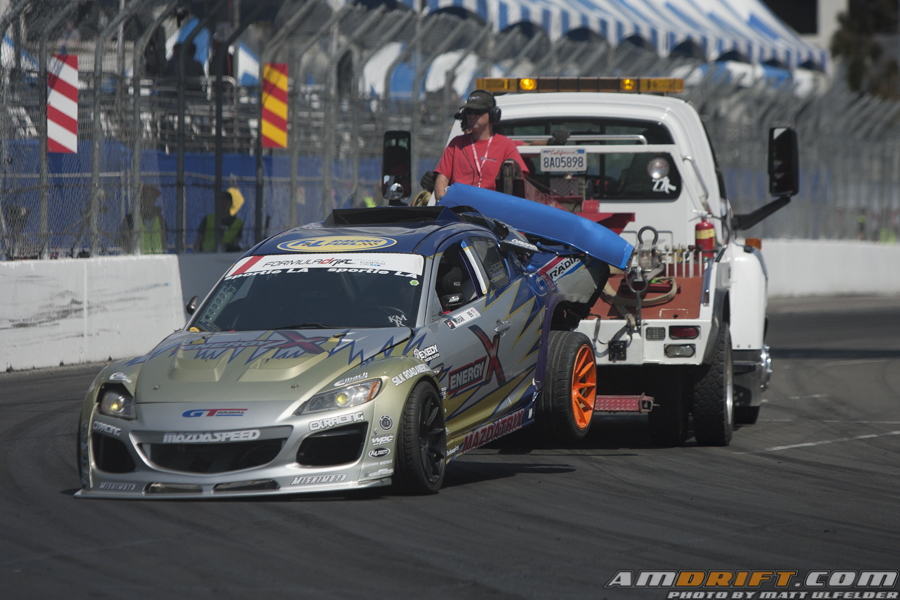 6. Mohan vs. Nishida – Mohan
Kyle Mohan comes up against Robbie “Bushida Blade” Nishida, and puts down a great lead run, filling all the outside clips. Nishida comes in a bit close at the last clip – sacrificing some angle to maintain proximity. With Nishida leading, Mohan enters early and begins to run a very dangerous line. He ping-pongs off the first wall and then comes under “Bill’s Bridge” and puts a little too much mustard on it – and smashes his rear passenger quarter panel into the wall. The impact sends him careening into the tire wall head on, but somehow the car ends up hitting hard with the rear towards the tire wall. In the middle of all of the chaos and excitement surrounding the wreck – Nishida spins before the next clip. What?!? Double zeros on a wreck?! The results could possibly be decided by the first run – and….. MOHAN GETS THE WIN! Considering the timing, he now has the full halftime break to repair his car…. will he make it to the line to battle in the Top 16? Stay tuned.

7. Aasbo vs. Landreville – Aasbo
Aasbo takes the lead, but doesn’t really do much with it while Landreville keeps it close. The Hankook Scion TC loses a fair amount of angle around the last clip when Landerville dives in to attack. Landreville sets a pretty deep line in front of a twitchy Aasbo as he comes into the last clip holding all of his angle. Aasbo takes the win but not with the usual “Norwegian Hammer” power – He’ll have to step up his runs to stay in this fight.

8. Grunewald vs. Castro – Grunewald
Conrad takes off and leaves Castro in his dust, only to catch up with the Megan Racing Camaro near the last clip of the course. It’s all uphill from here for Castro on his lead run. Castro leads a conservative line out front, which gives the nod to Conrad Grunewald. The seasons of seat time in the Camaro are definitely paying off for Conrad, it just goes to show that a well developed chassis can work wonders in the right hands – can’t wait to see his entries at #FDATL.

9. Gittin vs. Briggs – OMT
Gittin leads a clean run as Briggs is unable to keep up through the clipping points in front of the main grandstands and judges watch. You can’t even hear the turbo 4-cylinder of Dave Briggs as he leads the Monster Energy V8 Mustang. Both drivers correct on the second run, which is no longer a zero, only a deduction.

10. McNamara vs. Kearney – McNamara
An all Irish battle, both drivers looking to grab some gold. A small correction by Kearney leaves a bit to be desired as Mcnamara holds a clean line. Kearney must’ve resolved all of his car gremlins as he throws down a tail-dragging line. The run is not enough to impress the judges as the Viper runs wide. D-mac must have more than the luck of the Irish on his side today, and advances to the next round of competition.

11. Forsberg vs. Yoshihara – Forsberg
It’s always a treat when 2 former Champion drivers meet in battle, especially this one, Dai breaking in his new chassis, and Forsberg coming back to his highly developed and very familiar Nissan 370Z. Chris takes it wall to wall as Dai holds tight to his door in his new Falken Subaru V8 BRZ. Chris doesn’t give an inch as Dai leads a conservative line, with “The Force” putting an exclamation point on the run and sweeping the judges decision.

OMT – 9. Gittin vs. Briggs – Gittin
The V8 of the Mustang roars off in a very similar fashion to the first battle, leaving Briggs with very little to do but try to shut out Jr. around the last apex. The SR20 of Briggs puts down the smokescreen, but Jr. just won’t back down, and rides him all the way across the line and ends Briggs’ weekend.

12. Goodin vs. Saito – Goodin
Pat Goodin has been destroying it all weekend, and doesn’t stop now. He throws it in so hard on the first part of the course, only to be bumped abruptly as Daigo straightens right into his door! Pat is able to finish the course without even being phased, and leaves the Achilles Radial Lexus SC limping off the track from drivetrain issues. This is something you don’t see everyday, and it’s not a good way to start the season for Daigo. The drivers return to the pits to inspect their cars. The suspense is almost too much to bare!

13. McQuarrie vs. Angelo – McQuarrie
Tony Angelo lets McQuarrie pull about 4 car lengths, as the Mobil 1 Camaro lays down a clean run in front of him. Angelo can’t put it together in the lead, and McQuarrie stays on him like glue through the entire course. Tyler handily defeats Angelo with 3 judges voting in his favor, sending the orange nosed FRS speeding back to the pits.

14. Bakchis vs. Gushi – Bakchis
Gushi, debuting a 2JZ powered Scion FRS, comes up against Mr. “Odi” Bakchis in a close battle that started somewhat rough. Gushi wraps his lead lap nicely around the last clip with a nice line and runs it through the course end. The chase run of Odi is what really defines the victory for him – throughout the entirety of the course the Feal Suspension S14 was barking at Ken’s door. The judges didn’t have to think twice about handing out 3 nods for the victory.

15. Pawlak vs. Jones – Pawlak
The Falken Mustang piloted by JTP really surprised everyone, as it was thrown into the entry in a “manji” or “feint”, something most drivers have not been doing – very stylish. Relentless Jeff Jones chased down the teal and blue colors pretty well, but left too much room for JTP to move around the course without much stress. On the second run of the pair, Jeff whips away from the start line and tears down into the fans view, but wait – where is JTP? He’s sitting at the start line and has not moved an inch and judges call “jumping the start” on Jeff. Sometime during Jeff’s bumperless lap, an axle broke and he is forced to take 5 minutes. Unfortunately, the CX racing turbo S14 is not able to return for competition, and JTP walks into the Top 16.

16. Tuerck vs. Honhadell – Tuerck
The middle bracket battles are often the closest runs of the day, and this was one for Enjuku powered Rookie Alec Honhadell to remember in his first FD Top 32 bracket. The Retaks 2JZ FRS is Tuerk’d to the max on it’s lead run, but the rookie does not show fear and chases relentlessly. Smoke doesn’t phase the newbie, as veteran Tuerk tries to shake him off his arm without getting a break. When Honhadell takes the start line for his lead run, he has nothing to lose – he puts it all on the line, gaining a fair distance from Tuerck between the first and second clipping zones.The bright cyan blue V8 S14 draws a very solid cloud of smoke while putting in a stylish clean run in front of the 2JZ FRS. The judges seem to see a few flaws in one of Hohnadell’s runs, and award the victory 2-1 to the 2013 Championship runner-up, Ryan Tuerck, ending the Top 32 and moving on to the halftime break before Top 16.

The halftime break gave us time to visit and interview 2-3 handfuls of drivers for our upcoming video. You don’t want to miss it, trust us!

…check out the Top 16 battles and victorious warriors in the next FD Long Beach article, coming shortly. Thanks for reading and we hope you enjoy our coverage!